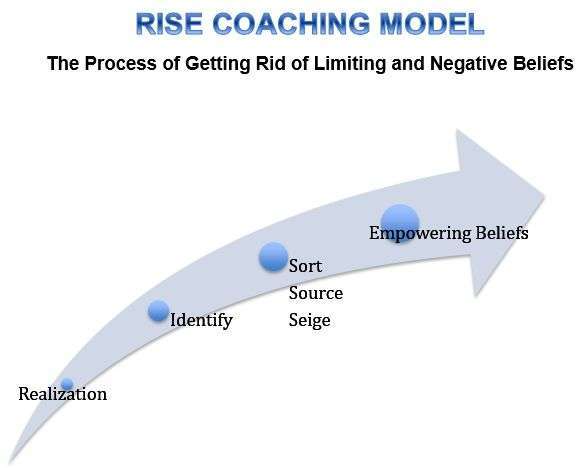 Limiting and Negative Beliefs keep many women from reaching their potential and ideal life. This restricting underlying system of beliefs about themselves and the world around them influences their ability to aspire, pursue and achieve success in their specific area of vision and goals. Because Limiting and Negative beliefs are often subconsciously reactionary fears rooted to the basic human needs of love, safety and belonging and not obviously perceived, they must be uncovered, eradicated and renovated into a new positive and affirming system of beliefs that will empower them to rise above every challenge!

When a woman if finding it difficult to find confidence or motivation to move forward toward a goal, take leaps of faith or overcome obstacles and challenges in her effort for success, the Transformational Coaching process can initiate the process of change that will free her to discover her abilities and attain her desires and goals. The two-phase process of Revelation and Renovation through this Coaching Method called RISE is tool the Coach can use to lead the Client through the steps necessary for transformation.

Phase 1- REVELATION
This phase is all about discovery of the Limiting and Negative Beliefs that are the source of inability to move forward and attain success.

R – Recognize:
The Coach must first guide the Client to look beyond obvious or presumed obstacles and shift her focus to deeper underlying reactionary thoughts and motivations. Up to this point the Client most likely is unaware of her Limiting Beliefs and that is why she is coming to you for Coaching. Without recognition that underlying Limiting and Negative Beliefs is the culprit of her difficulties she will continue to remain in a pattern and cycle of defeat.

Simply encourage the Client become more introspective, paying attention to more than the obvious and become self-aware. She can do this by becoming aware of:

– Listen to “Self-Talk”. Record Negative and Limiting thoughts or emotions that happen and what triggered them.

– Record Recoil. Taking time to think through and record past and present reactions of not taking action or quitting when faced with obstacles to be reviewed with the Coach.

I – Identify:
Once the Client has become self-aware and open to the new focus, the Coach can review the Client’ discoveries. Through powerful questions the Coach will ask about those discoveries, the Client will articulate the Limiting Belief. The Coach at this point will mirror back the Limiting Belief giving the Client opportunity to thoroughly identify it as a Limiting Belief. At this stage not only will she isolate and identify the belief but will have a new awareness of the basic human need from which it stems, which will be helpful in her Impending empowerment.

The Coaching Tool, “10 Questions To Challenge Limiting Beliefs“, is helpful for this pinpointing a Limiting Belief, tracking it’s source and disengaging.

E – Empowerment:
This step now brings total transformation! Once the Limiting and Negative Beliefs are identified and discredited, the Client replaces the old belief with new empowering beliefs. The Coach will ask the Client to create one or two beliefs are affirming, positive and produce expectation of limitless possibilities before her and her ability to succeed. She brings into her view a perspective of opportunities, resources, support and inner resolve that she can meditate upon and fill her subconscious and conscious with daily until it is internalized as a new source of motivation, attitude and behavior. It is in this stage that she can also now look at possible obstacles and challenges and project an attitude of resilience and forging ahead instead of recoiling and quitting. New attitudes, motivations and reactions follow her newly formed positive belief system equating a transformation!

Recommended Research paper: “Getting Rid Of The Limiting Beliefs That Hold You Back So You Can Get To Your Ideal Life!”

This site uses Akismet to reduce spam. Learn how your comment data is processed.

Now I feel empowered to use the tools I learned in this program to assist clients in solving their own life challenges.

The Universal Coach Institute training has been so valuable to me as a business woman and teacher. I’ve run my own vocational school for the past eight years and work one on one with private clients. In the past I would take the students and clients problems home with me and it really weighed me down. Now I feel empowered to use the tools I learned in this program to assist them in solving their own life challenges and finding healthy solutions. The bonus is I won’t be carrying the weight of the world on my shoulders. Thank you Coach Ayisha for this valuable gift you have shared. I’ve grown so much and feel certain this is going to grow my business as well.

After applying the coaching techniques in my own life, I truly have become more self-aware of what I really want to accomplish.

Before I found UCI, I had been patiently waiting to find the right life coach training program. I didn’t want just any ordinary coaching program. I had been searching for several months before I finally found UCI. I knew UCI was the right one because I’ve been in prayer about becoming a transformational leader. UCI offered the Transformational Coach certification. I knew that was God! And I must say, after going through the program and applying the coaching techniques in my own life, I truly have become more self-aware of what I really want to accomplish. UCI not only helped me to achieve becoming a certified life coach but it also paved the way to help me achieve my life goal of become a transformational leader.

Latonia Price
Effective Living, LLC
Greetings, our website uses cookies to offer you a better browsing experience and to analyze site traffic. By continuing to use our website, you consent to the use of these cookies. Learn More